I AM SO EXCITED 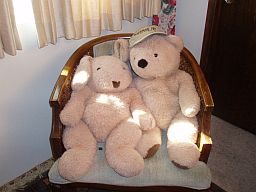 So Dora tells Bill, "I am so excited about my new job I think I am going to throw up."

So Bill says nothing but the next day he says to Fred, his long-time friend, "What's with women?  She said she was so excited about the new job, she thought she was going to throw up."

At that moment, a blush comes over Bill's face, and he hopes desperately that Fred doesn't notice.  He is remembering his first date with Dora.  He was so excited (nervous) that he thought he was going to throw up.  He took Dora to his favorite Chinese restaurant, but had a hard time eating and then after dinner, he was full of gas and became doubly nervous that he would not be able to control really awful farts which were pushing really hard to get out, and holding them in became excruciating.

So now Bill remembers and knows exactly what Dora is experiencing.  He regrets not saying something to her last night, but his regret quickly shifts, shifts back behind his intense need to be the man, to be all calm, in control, emotionless, and Fred doesn't help.  "Well, you gotta know by now how women are.  They're all into their emotions, you know, hormones and cycles and they just get all weird about the damnedest things."

Too embarrassed to tell Fred that he understands Dora, he just says, "Yeah, I don't know why I forget that women are that way, and she's always been that way, come to think of it."

And now the shame sets in.  He betrays his wife by saying that she is like all the other weird women in the world.  Throughout the rest of the day, he wonders if he will have what it takes to share with Dora that he gets it and that he's sorry he didn't let her know how much he gets it last night.

And sure enough, when the time comes, Bill acts all cool and simply says, "So how was your first day at the new job?"  And Dora gets it.  She senses Bill's neutral zone, so she simply says, "Oh fine.  I got over my nervousness really quickly."

SO WHAT DO YOU THINK?

So want some support in exploring your emotional differences or emotional SIMILARITIES?
.
That support is only a click away.

THANKS FOR READING AND COMMENTING AND INVESTING IN YOUR RELATIONSHIP.
Posted by Vernon Bradley at 9:38 AM